As I will be travelling after Christmas and only be back in Singapore 30 December, I decided to do the monthly update earlier for this month.

While US stocks were moving higher in light of tax cut this month, local stocks didn't seem to have the same sentiment. Up till today, STI lose 47.83 points, or 1.39% this month. Since everyone is preparing to enjoy the well deserved year end break, I don't think much will happen next week. (personal opinion, don't hold me for it)

Compared to the index, my portfolio did better this month. Its value dropped only 0.4% compared with end November.

This month, CWT finally was de-listed. I bought it at 95 cents years ago and now sold it at S$2.33. So it was not so bad. No other transaction was done.

For the year 2017, Singapore share market has done well. The STI index gained 504.95 points, or 17.53% for the whole year. My portfolio did not perform as well. Its value rose only 10.41% for the year. That was due to poor performance of some heavy weights in it, e.g. SPH, Comfortdelgro, M1 etc. Net cash flow into the portfolio (fresh fund invested) this year was S$188,000.

Total dividend received this month was S$14,000, from stocks, bonds and UT. The full year passive income amounts to S$178,000, surpassing that from last year and exceeded my target. I have invested in a small business run by a friend and the dividend which I was supposed to receive last year was only received in January this year. If we shift the dividend to last year, then total passive income received this year would be almost the same as last year. All in all, dividend from shares has decreased this year but was compensated by dividend from bonds and UT's. 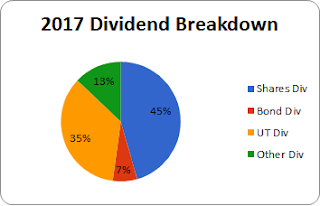