For the past 8 days Singapore mourned the passing of our nation's founding father, Mr. Lee Kuan Yew. It was a very emotional week but the stock market did not seem to be very adversely affected by Mr. Lee's passing, for STI was quite flat over the last week. Credit to the late Mr. Lee who had ensured a smooth transition of power to the next generation of political leaders.

Global market continue to be affected by the pending US interest rate hike, which looks likely to happen quite soon. Greek saga looks settled, though it is not quite done. China's economy slowdown was another hot topic, but some investors are hoping that the Chinese government will ease liquidity, so that cushioned the effect a little.

Despite all these noises, STI finished the month March up 44.15, or 1.30% compared to end of February, it closed today at 3,447.01. However, my portfolio performed badly this month. The value drop 0.41%! Reits and a few other property related counters performed badly. Noble was hit hard due to Iceberg report.

This month, I bought some shares of SIA Engineering and Nera Tel. I also received some shares from AimsampIReit, Mapletree Ind Tr and CapitaR China Trust. My Popular Group Shares were debited from my CDP account. the proceed was re-invested. I received a total of S$5,903 in passive income, from both stocks and UT. Below are my top 30 holdings as at 31 March 2015. Apart from some position swopping, there is not much change in the list.

I was an infant when Mr. Lee Kuan Yew became the Prime Minister of Singapore.

At that time my family (my parents and 5 children) lived in Jalan Bukit Ho Swee. It was a slump at the city fringe. Adab-houses, no electricity, no modern sanitary facilities, and water pipe only ran to certain common water points, where women washed their clothes, and children took their showers.

I survived the 1961 Bukit Ho Swee fire, thanks to my 2nd sister, who carried me and ran to my grandparents shop house at Chin Swee Road when the fire broke out.

After the fire, my family, along with many others who lost their home, were put up in a school compound for a few months. My mother told me the school was called  建国小学. Thereafter, we moved into a new flat in Kim Tian Road. It was a 2 room flat shared by 2 families. As the other family had only boys, they took the living room, while we took the bedroom. Not too long later, when the first batch of emergency flats was built on the original slump area of Bukit Ho Swee, we moved back to Jalan Bukit Ho Swee.

Our new home, Blk 9 Jalan Bukit Ho Swee was a One Room Flat, with a kitchen and a bath room (without toilet bowl) attached. There are 22 such flats on each floor and a common toilet with 4 toilet bowls for the residents to share. The block was 6 storeys tall and there was no lift.

In this humble flat I spent my childhood. Also in this area I experienced the 1963-1965 racial riot. I saw with my own eyes people fighting on the street, injured person lying there and carried away, police chasing rioters .... etc. Children like me were not allowed to play outside our home. We were too frightened to go out anyway.

I went to primary school in 1965. One fine day in August, we were told by our teacher Singapore had become an independent country. I didn't understand what it meant, but remember that from then on, we had to attend flat raising ceremony, sing the national anthem and recite the national pledge every morning before class. It was during that period I first learned Mr. Lee Kuan Yew's name, and that he was our prime minister.

In the 60's and early 70's many children dropped off school during secondary education. None of my siblings completed secondary school education. They started working to help support the family as my dad didn't earn enough. I was lucky because I was the youngest child in the family. My family's financial situation had improved when I was in secondary school. So I got to complete my JC. I was given a government scholarship for my university study, without which I might not have gone to university, and for which I am grateful till today.

I still can recall how the uncles in my neighbourhood fear the loss of their job and livelihood when the British army withdrew, how my older siblings went to apply for job in factories in Jurong town, how some student leaders were arrested in the 70's.... There was another labour union besides NTUC, which disappeared eventually. All these distant memories were evidence of the transformation of Singapore into the global city today. I was an eyewitness to the transformation too.

Yes I literally grew up with Singapore's transformation. We paid dearly for this transformation. We were literally uprooted from our culture. We loss our mother tongue - dialect, to certain extend our traditional value and cultural heritage. However, our achievement is also spectacular. From swamp field to Asian's financial hub, places where MNC's have their regional centres, country with one of the highest per capita income, one of the busiest port of the world, one of the most transparent place to do business, most reliable power grid..... the list goes on. And all these were achieved in just a few decades.

There are surely many reasons for Singapore's success, but Mr. Lee is definitely one of the major factor to this. His vision, his knowledge and wisdom, his will power to implement policies that are unpopular though good in the interest of the country, his ability to rally the whole nation behind him for the course he set, is, I dare say, the most contributing factor to our success.

I may not agree or like all the things he has done, but that does not affect the respect, admiration and love I have on this great man of our time. Put his name among those big names of modern history, his selfless love towards the nation, always putting the interest of the country first will put him second to none.

As I mourn with fellow Singaporeans for the loss of our founding father, the greatest son of Singapore, I thank God for giving Singapore this great leader.

Rest in peace, Mr. Lee. Though you are gone, you'll live in our memory. Your spirit will inspire us Singaporeans to move on. 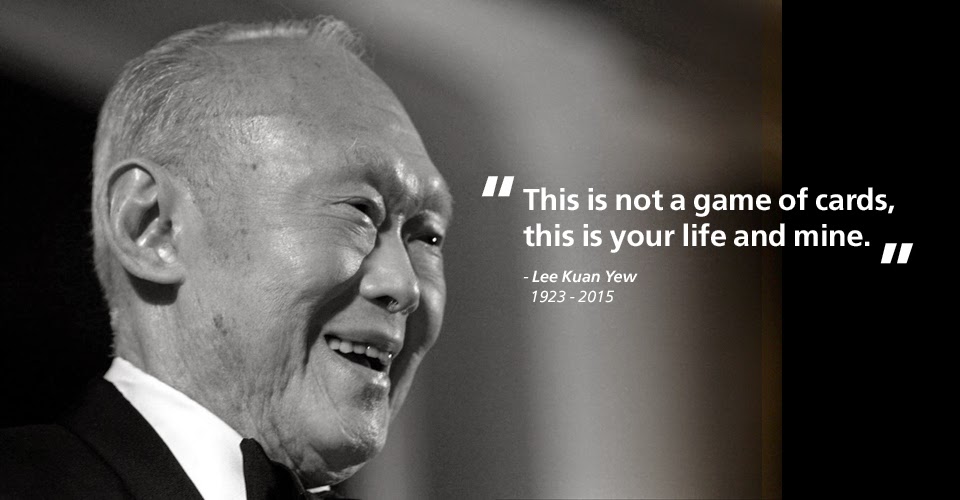 I thank God that he has given Singapore Lee Kuan Yew as our leader, for Singapore won't be what it is without him.